If you know about #js13kgames contest you might be interested in my small game created for it. 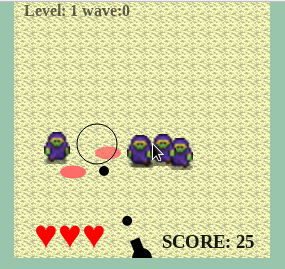 I called it Cannon Defense, but the sole purpose of creating it was to learn in practice how to create a game. You can say that it looks ugly, or is small, but for me it was great co create it.

My submission is not yet online so if you want, play it at: http://krzychukula.github.io/js13k/

Code is on github: https://github.com/krzychukula/js13k

What I have learned: