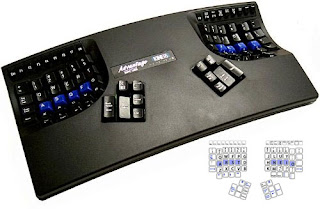 Not long ago while watching one of the presentations of Andrew Sorensen (I recommend The Concert Programmer as well by the way) that he is using a really funny looking keyboard. I started googling it and found out the strange and marvelous world of keyboards that I had no idea existed.

I want to note here some most notable things that I had learned and maybe you can learn something in the process.

At first I was exploring Keyboards, then started exploring keyboard layouts and ended up back in the hardware land at the end.

So let's start with the keyboard that inspired this whole quest: Kinesis Advantage

I found this video review to be most useful to get an idea how it looks and works.

Mini review:
+ It's ergonomic with mechanical keys (that's a good thing)
+ Your thumbs can do something useful instead of just hitting on 'space'
- 'Esc' and Function keys are really small and cheap.
- No arrow keys
- It's really expensive...

Then I learned that mechanical keys are way better than 'standard' keys, but they also cost much more and are 'clicky'. That means that they make a lot of noise while typing.
There are also different kinds of them with different characteristics. It's best to hear and feel it so go to the shop or watch a lot of comparison videos like this one to get an idea:

I realized that one of my coworkers is using the mechanical keyboard and while I was checking it out he told me that he uses Colemak for writing in English. Colemak is more efficient for typing English, but he was switching back to QWERTY for Polish.
From that moment I was really eager to tray it myself and get some experience with it, but I wanted to use the same layout for Polish and English no matter what.

Turns out there is even layout optimized for Polish called klawa.pl with some impressive statistics and really cool positions of keys, but the problem is that I type a lot in English. Maybe 50% maybe more so I started researching which of the English layouts would be best for Polish.

From my small samples, Colemak was actually much better than the newer ones like Workman and I even found layout that enabled me to use only one Alt for Polish letters: https://github.com/michalzajda/colemak

I can recommend a really nice site for learning alternative layouts if you are interested: http://thetypingcat.com/course/colemak Best feature is that it can emulate your new layout without any changes in you OS or keyboard so it's great to learn and get a feel of the layout.

While I picked Colemak I wasn't sure about it and asked the creator of klawa.pl for some help.

Thanks to dooh.pl I get the list of English layouts when used for Polish:

I didn't expect Dvorak to be so high on the list so I asked one of my friend who I knew started using Dvorak 2 years ago for some feedback.

There is a lot of posts all over the internet claiming that it's great or that QWERTY is good enough but one of them really resonated with me: https://blogs.msdn.microsoft.com/jaredpar/2009/01/12/dvorak-keyboard-is-it-really-faster/. It has a really nice point of view so I would recommend it to anyone thinking about switching to the different layout.

Are you curious about my friend how picked up Dvorak? He gave up on it - basically, it's too inconvenient to work in a company and use a different layout.

After a couple of days with Colemak (and being really slow), I was impressed with the way some of the keys were placed on the keyboard. A lot of words started to be much easier to write - even in Polish. The downside was that it was really annoying to switch to type ";JK". I have no idea why these three were so annoying but I felt that their new positions are slowing me down a lot.

In the end, I gave up on Colemak for now and started reading more about Ergonomic Keyboards and Keyboards in general.

If I start working a lot from home at some point in the future I plan to revisit these layouts but instead of Colemak, I want to go with Programmer Dvorak. This layout makes a lot of sense to me and I can at some point forget about QWERTY all around me it would make a lot of sense.

In the meantime, I want to play more with remapping keys on the Mac and maybe use Karabiner to get some of the benefits of Programmer Dvorak without the chance of the letters layout.

So back to the Keyboards.

There is this one page you have to read through if you want to learn more about ergonomic keyboards by Xah Lee.

The page that will give you most information is How to Chose Ergonomic Keyboards. It's great and you have to read it.

Unfortunately, the problem is when you have a limited budget but still want to get the mechanical keyboard. Basically, you have to pick Microsoft Sculpt Ergo or forget about ergonomics (but pick "tenkeyless" keyboard).

It's really worth reading his post about really small keyboards as well: http://xahlee.info/kbd/idiocy_of_happy_hacking_keyboard.html What I learned is that a lot of keyboards are really overpriced and badly designed at the same time.

If you have to pick unergonomic keyboard it's best to pick one without numbers on the right (tenkeyless) - of course if you're not using them so that the distance between your hand position when typing and the mouse is minimal.

It's best to have all the keys, especially arrows for the keyboard to be useful in all situations.

Space should be as short as possible - it's best if you can click on Alt with your thumbs. Unfortunately, there aren't many keyboards like that and they all are too pricey for me.

So how should I pick a keyboard? If you don't have a budget limit the no problem but for me I can't afford ergonomic and mechanical keyboard at the same time.

Right now I'm mostly thinking about one of the two: 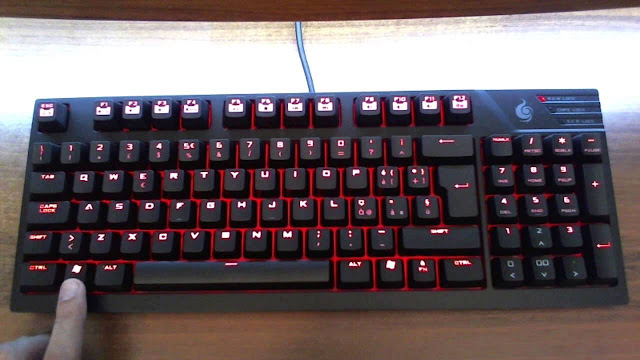 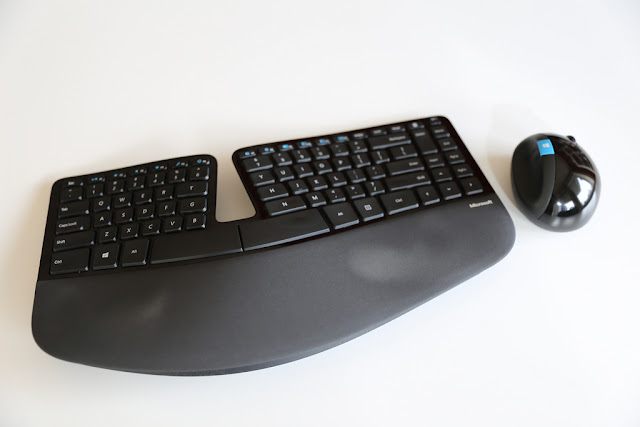 Both of them has their own pros and cons:

- Comes with the mouse I don't need

- Looks like it would move mouse more to the right

I have no idea which one to choose at the moment but I know that I want to try for myself if ergonomic keyboard makes any difference for me and if I like mechanical switches. Picking any of these makes sense.

Later this year or maybe in 2017 I want to see how new ergonomic keyboards are doing and maybe but something more ergonomic. Most notably:

If I forget about ergonomics:

There is another thing that most of the ergonomic keyboards have - keys are in straight columns.

The thing is that "staggered columns" layout is there because of typewriters: 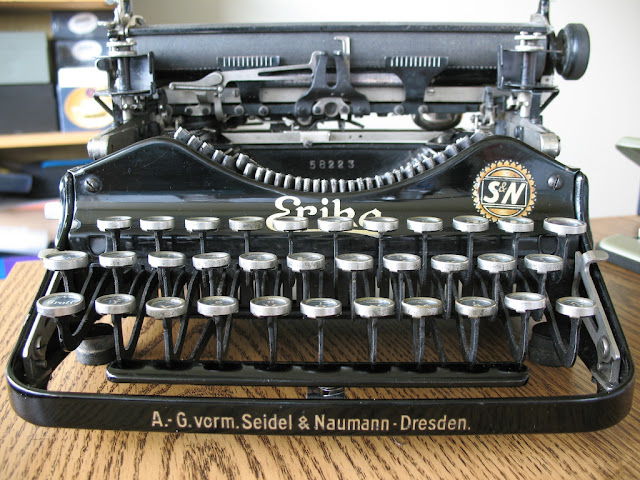 Can you see how the keys are attached? Each row had to be moved slightly so that it would be easy to assemble it and there won't be any collisions between the keys.

Truth be told it always makes me crazy when touch typing - especially with my left hand.
Consider typing "R" you have to move your first finger up and left from "F". It's crazy uncomfortable and I still remember more that 10 years ago how I thought it was crazy uncomfortable that I have to learn to do that. Unfortunately, I thought that it's probably just me...

Promising:
I really want to check out Keyboardio, but it's so expensive that I want to see some reviewers before I decide to buy one.
What I like about it:
+ Keys in columns
+ Function keys for palms
+ Ctrl-Alt etc. keys operated by thumb
+ Splittable
+ Mechanical
- Expensive
- No F1-12 on arrow keys

I don't care about wood, colors etc. that make it really expensive so if everything goes well I hope to reevaluate it next year.

Another one worth trying would be ErgoDox Infinity or Kinesis Advantage

In the meantime some links for buyers in Poland:

So at the end I would appreciate if you have any suggestions or experiences with alternative layouts (I'm back to QWERTY for now) or can give me some advice if I should go for ergonomic or mechanical for now.