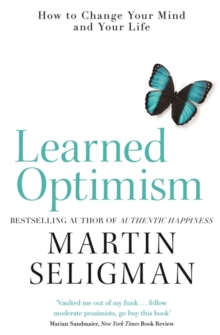 Middle of the book is the story of the guy with a hammer who tries to solve all kinds of problems with optimism. Not convincing and pretty boring to read.

Did I like it? Kind of, but I'm not sure if it's worth recommending.

Your mood depends on what you say about things that happen to you - events themselves are neither good nor bad.
You can see even bad events from a time perspective as fortunate. For example, being fired if it lets you find your dream job.

There are 3 explanatory styles: #

For me it's most useful to see it in a table with examples of thoughts you might have for each of them:

Another way to look at it is:

Mr. Seligman believes that some cases of depression are pessimism on steroids. In the book pessimistic and depressed people being more realistic. In other books, I've seen it's stressed that depressed people are far from realists. They struggle with mental distortions that keep them in the depressed state. Optimistic people do seem to have some distortions of their own but they make them feel better. Eg. they are above average (illusory superiority) and in control even when they're not.

One striking example of optimistic behavior you can do more to feel better is blaming others. But, it's more common now to hear that you should take responsibility for what happens to you. I can't say anyone likes a person that always blames someone else.

Permanence and Pervasiveness make a lot more sense to me in general cases. At the end of the book, there is a couple of strategies to dispute those kinds of thoughts.

The other two are now standard in CBT list of disputations for cognitive distortions.

Question I didn't find an answer for: #

Mr. Seligman says that you can't fake your optimism score and wants to use it in job interviews. I'm not buying it because he says so and I couldn't find any proofs for it. I'm more likely to believe that knowing what the test is looking for would allow me to fake a response.

Other points of view #

A lot of new IT projects start with new planning technique called Pre-mortem. It is like the cognitive strategy of Defensive pessimism. The idea is to look into the future - imagine all that can go wrong and prevent all those things from happening. It makes a project safer and faster to deliver by moving the hard things to the frontline.

As you can read on Wikipedia Defensive pessimism makes you as much accomplished as optimism. The only drawback is that you won't feel as good as an optimist about it. That's not a big cost to me.

In real life, pessimism is not seen as that bad when used wisely. If it makes you a little less happy but pushes you to do things. Seligman argues that optimism would get you the same result with positive delusions. You can push harder when delusional. That's true. You can also do dumb things without taking the blame. Over and over again as you're optimistic about the end result.

Mr. Seligman advises using both optimism and pessimism but to pick one depending on the cost of failure in a given situation. If the cost is high - then pessimism is safer. The fun part is that optimism makes the most sense if the cost of failure is small. Asking for a rise. Striking a conversation. There is a lot of situations like that in life. As always the problem is seeing things clearly and deciding on a case by case basis what strategy to use.

What I suggest instead: #